Tom Hiddleston takes on a new role, rumors he may leave another behind

British actor Tom Hiddleston, also known as Loki from the Marvel franchise, Thor took on a new role on Thursday morning. Hiddleston dropped by Fox 32's studio in Chicago to give an impromptu forecast. Hiddleston talks about the nasty weather and may even blame Chris Hemsworth (Thor) for the severe conditions. As someone who works in the news industry I have to say he isn't half bad. Take a look at his meteorology premiere.
Besides for making his debut as a weatherman, the British hunk has been busy working away on several projects including The Night Manager, Kong: Skull Island, and Thor: Ragnarok. Hiddleston's character Loki has become a fan favorite, but an end may be insight for the Marvel bad boy. A year ago rumors began to circulate that Hiddleston may not wear the horned helmet much longer. When a interview mentioned  him talking about dying his hair and thinking he may not be able to much longer a year ago rumors started to circulate about the possibility of retiring the green cloth. Well, now it sounds like rumors are starting to turn into truth. Loki may be no more after Thor 3. Recently in an interview Hiddleston comments "Thor 3 will be cool because I've not done it for four years...This will be my last time out of the gate". While that statement sounds definitive you never know. Don't cry ladies there's at least one more Thor movie, Thor: Ragnorak will be released November 3 of next year. 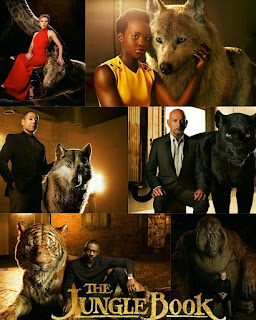 The Jungle Book Cast And Their Counterparts

The second live action The Jungle Book movie will be hitting theaters in two weeks. The movie was directed by Jon Fabreau (Iron Man Trilogy) and has an all star cast. Here is a list of the cast members and their characters. To the right is a picture with each actor and their character.
Scarlett Johansson-Kaa, Bill Murray-Baloo, Ben Kingsley-Bagheera, Idris Elba--Shere Khan, Lupita Nyong'o-Raksha, Giancarlo Esposito-Akela, and Christopher Walken-King Louie.

Oh, and one fun fact Kaa has typically been a male snake, but in this version Scarlett Johansson takes on the role to make the snake female (this is more realistic because in nature females are more aggressive than males).