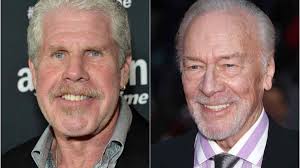 Ron Perlman (Hellboy, Sons of Anarchy) and Christoper Plummer (The Sound of Music, The Girl With The Dragon Tattoo) just signed on for an adaptation of the graphic novel, Howard Lovecraft and The Frozen Kingdom. The animated movie will be about H.P. Lovecraft when he was young and going on wonderful yet terrifying adventures. Plummer will voice Dr. Herbert West and Perlman will voice Shoggoth. A release date has not been announced yet.